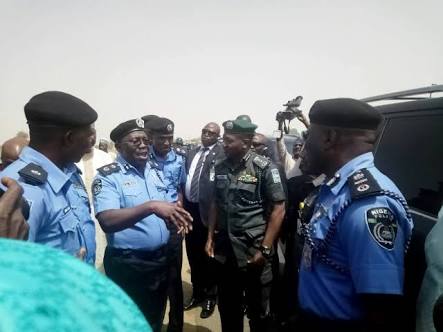 It was gathered on Saturday that two policemen were still missing among the Police Mobile Force Squadron 4 from Ibadan, Oyo State, who took part in the operation against the criminals at Birnin Mogaji Village, Zurmi area of the state.

This is contrary to claims by the police spokesman, Moshood Jimoh, who had claimed only one policeman lost his life during the operation.

About 104 hoodlums were reportedly killed by the police team during the incident.

Police sources told The Punch that the rate of police casualties informed the decision of the Inspector-General of Police, Ibrahim Idris, to dispatch the DIG Operations, Joshiak Habila, to Zamfara State to coordinate the operation.

A source said, “Over 100 bandits were killed during the operation, but we lost eight MOPOL officers while two are missing. Normally, during such operations, it is not unusual for us to have casualties, but the cheering news is that we were able to decimate the bandits.”

“Though the police had an upper hand during the encounter with the bandits, the leadership lied about the police casualties.

“If it was only a policeman that lost his life and normalcy had been restored in the area as claimed, why did they (leaders) send a DIG with additional operatives and equipment to the scene?” another source said.

Jimoh, however, denied the loss of eight policemen, stating that only one operative died while 12 were injured.

“I have just spoken to the CP (commissioner of police) and the DIG and they said only one policeman died and 12 were injured. Two or three officers, who were missing, have been found, and we are still patrolling the general area,” he said on the telephone on Saturday.

The police had said the PJOT operatives destroyed 50 criminal hideouts in the Zurmi LGA and recovered 500 cattle and 79 sheep during the operation.

The force said since their deployment on November 9, the PJOT had arrested over 85 suspects, recovered 27 AK47 rifles and 52 locally-fabricated guns and other dangerous weapons.

We Sleep On Bare Floor, Have No Bathroom –Corps members at Niger NYSC camp